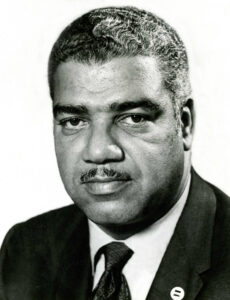 Thursday, March 11, 2021, marks the 50th anniversary of the death of Whitney.M. Young, Jr. 2021 also marks the 100th anniversary of his birth on July 31, 1921. Lincoln Foundation will be commemorating Young’s life throughout the year to honor his contributions to education and social justice.

Young was born on the campus of Lincoln Institute in Simpsonville, KY. He is known as one of the “Big Six” of the Civil Rights Movement, which included Martin Luther King, Jr., Roy Wilkins, James Farmer, John Lewis, and A. Philip Randolph. He spent most of his career working to end employment discrimination in the United States and led the National Urban League in working for equitable access to socioeconomic opportunity for African Americans.

Young was an advisor to three sitting Presidents, including Presidents John F. Kennedy, Lyndon B. Johnson, and Richard Nixon. A trusted friend to President Johnson, Young proposed the domestic “Marshall Plan,” which led to Johnson’s War on Poverty legislation. Johnson later awarded Young with the Presidential Medal of Freedom in 1969.

The legacy of Whitney M. Young, Jr. is also commemorated at this birthplace which is a National Historic Landmark and one of 49 places throughout the United States. It is featured in the National Service travel itinerary entitled “We Shall Overcome – Historic Places of the Civil Rights Movement.” Tours of the Whitney M. Young, Jr. Birthplace are provided on an appointment-only basis. To schedule a tour, please contact Lincoln Foundation at 502.585.4733.